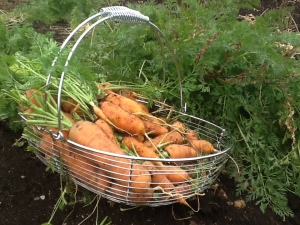 carrots fresh from the garden

Carrots are all that’s left in our garden. Even after several hard frosts, the tops still look green and alive. Fall is a great time of the year when you have a garden. It’s the time to get a reward for all that hard work.

Our garden is in a new location and the soil was “hot”. Not temperature wise, but in the sense that it was too rich. Composed manure takes a long time to break down. It’s sped up by turning the pile frequently. This stuff looks like soil but on closer inspection there is still a lot of straw. The onions, potatoes and squash did not grow at all. The spring was very dry which was more than half the problem. The other half was that we went away for a month in July. The garden turned to a giant weed patch. manure comes with weeds. That’s a fact.

We even got a soil test kit ( the cheapy one) and it told us that the soil had a high pH.  I thought cow sh#t was acidic.  I just have to figure out what to put in the soil to correct the condition.  I think the straw helps with drainage; sometimes a good thing, sometimes a bad thing. 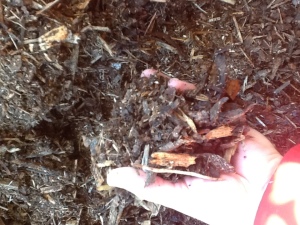 A hand full of bark mulch 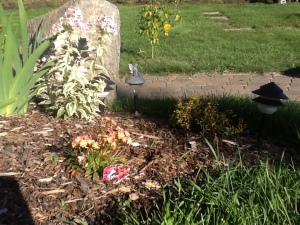 a flower garden at last

The flower bed in the front was a blooming success.  I had very little to do with it except to make sure there was a proper irrigation system.  I’m not going to sit by and [have my wife] spend  a lot of money on beautiful perennials just to have them die of thirst.

In the spring I got a load of trees.  I should mention that here since I think I got them after I posted the spring edition blog. I put them in the old garden.  They were fairly beaten up from the ride. It had been a windy day and the trap over the trailer flapped around, breaking and wearing branches off the trees. I think most of them will recover. 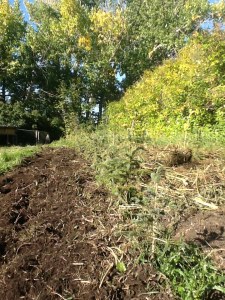 A row of little spruce trees