Looking back on last years Christmas letter, I found a few gems. One of Laurie’s favorite moments of 2014 was “Planning flower beds for next year”.  That plan came to life, but not by Laurie’s hand alone.  The flower garden is possible only with a ribbon of family and friends weaving through it – both past and present. Feature rock [Jasper, Jonah, Brian, Tracey].  Patio and retaining wall [Jim, Judy, John, Karen], Dirt: [Jim, James, Cathy], The flowers and plants that give the perennial beauty, attracting birds and butterflies: [Phil, Wendy, Teresa, Karen, Heather, Dave, Judy]  And making sure visitors find their way in the night; the landscape lights [Stewart, Cathy].  If you’re wonder why your name is, or is not shown, it is either you, or me, have forgotten something.  Most likely me. 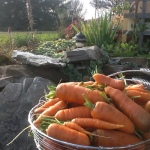 carrots from the garden 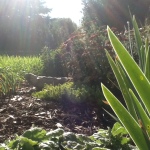 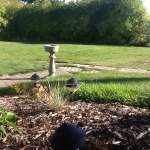 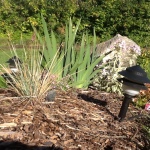 the flower bed with landscaape light and feature rock 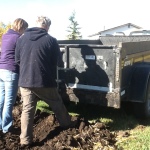 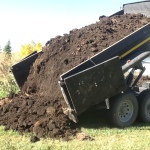 A quote that rang true: “Didn’t build a dock – that’s next summer”.  Sure enough, we did it.  The logistics of getting the dock material out east could fill an hour-long comedy show.  Cargo:  3500 lbs of reclaimed fir, a stove, a boat, 4 passengers with luggage.  Vehicle: Abandoned and resurrected-from-the-dead Ford F250 oil-field truck, gross capacity: 3000 lbs.  You do the math.   While using both hands and all strength to navigate a turn in the highway, I hear Kiersten say to her cousin “It feels like we’re going to tip over” 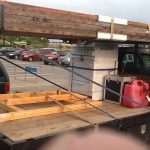 Room for more if it weights nothing 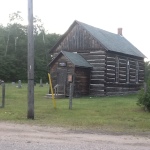 A pioneer church east of Huntsville On. 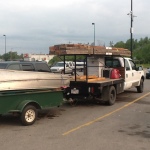 It was a fun summer, but Gracia was not there to complete our foursome.  She was working for the YMCA chaperoning a bunch of exchange student to the best spots in Alberta, which brings in another quote from 2014 “Gracia didn’t get her car fixed (Greyhound ahoy!)” listed under things we did NOT do. Chaperoning requires a car, so we got to fixin’ the classic low-rider Acura.  At the end she took them home via train to Montreal.  #WorstTripEver.  No. Er yes. Maybe.  Definitely no.  In her words there were some really fun parts of the trip and not-so-fun.  No beds?@!  True.  3 1/2 days, no bed.  At the end she got to poke around Montreal and have some fun.  Meanwhile back at the cottage, the dock got built.  It was me who drew the short straw and drove the truck home.  Laurie flew.

There was another gem titled “Things we didn’t do” and the quote is “Laurie didn’t get fired in the great PennWest layoff of 2014”.  True, however she got fired in the great layoff of 2015!  Layoffs became a  a bad habit with PennWest as oil prices dropped.  It was a few months of stressful job hunting, but finally found work with fabrication company Bilton Manufacturing.

Kiersten is tearing away her dependency by learning to drive.  She’s proclaimed that I gave her the old blue Volvo wagon, but I have ulterior motives.  The sooner she’s driving herself to school the sooner I can get a full time job. The requirements to ownership were that Kiersten help fix the car to a safe roadworthy standard.  So far she’s learned about CV axials and lower control arms and other can-I-have-the-keys-now related stuff. As for my career, I’m studying at home to become certified in Mapping software know as ArcGIS.  I’ve come up with a quick map showing where we were this year.

Where Our Family Was in 2015 Story Map Link