The estimate was for $1600 dollars just to trim dead wood from our elm trees.  After Christmas 2012 I definitely didn’t have the money so I climbed the trees and did it myself.  Mother Nature never informed me that she was planning to take a lot of the branches off with wet spring weather, would have saved me some climbing. (Laurie had to leave the property when the trees came down, or would have chained herself to them in protest)

Kiersten has been doing a lot of skiing so we got her equipped with her own gear last year.  There was lots of snow locally and we also managed to get to the mountains a couple of times. I took Kiersten and her friend Michelle to Lake Louise, where we skied most of the runs.  (Michelle’s one of the “Yodeling Swiss” skiers, I’m sure she was putting Tom and Kiersten through their yodeling paces on the way down the mountain)

Laurie, Kiersten, and I went down to Cochrane to help her brother Chris with a family move.  They now live in Boonyland, er, I mean Benchlands.  We are looking forward to spending Christmas Day with them in their new house.  (They just keep moving farther and farther away from us, hmmm…)

Gracia has been spending more time working with the Peer Support Centre on the university campus.  She worked there most of the summer and continues working part time hours through the school year.  This work has moved her to a new major in psychology, so she says.  I believe that the mind expanding espresso she serves as a Starbucks Barista is the real reason. (Or maybe she just needs all the help she can get to figure out her wacky parents!)

One beautiful spring day the Volvo station wagon broke its arm. The arm got infected and the car died.  I found a donor card in the glove box and am now harvesting organs from it.  We bought a newer, better, faster, (more expensive to repair) version of the same car.  Cathy did the reliability test for us while we went to Ontario with her Honda Odyssey. Laurie: “That makes 2 dead vehicles in the yard Tom; looks like your brother James may have some competition!” 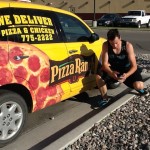 Daniel and Erin came with us to the cottage.  Daniel only came with us so he could go to the Pizza Ranch featuring an all-you-can-eat pizza buffet.  There is now a grainy, black & white picture of Daniel with the caption “Double Charge This Patron!”.  (I think that was the only day that Daniel got enough to eat, my learning curve regarding how much a 16 year old, 6’2” boy eats was not quick enough, sorry Dan!)

Tipi poles were harvested, peeled and set out to dry.  Late this fall all four of us tried to put up a tipi.  I can tell you that there are no natural instincts that white people posses that will make this task go smoothly.  When we were done it looked like a French circus tent without the walls and took 60 man-hours of labour to accomplish.  My next plan is to declare the acreage a sacred Aboriginal Hutterian Druid Temple site and never pay taxes again. (When the county sees the tipi they’ll probably double our taxes, on account of the “second residence”)

A very Merry Christmas to you all, anyone wishing to take advantage of our tax free status is welcome to come for a visit and stay in the Tipi! (Our best to all in 2014!)

2 responses to “2013 Christmas Edition of The Hepburn Home Page”