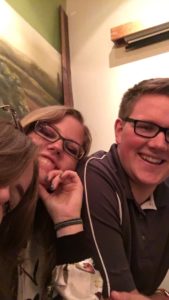 Plans were afoot for a great party!  Kiersten and her cousin, Jonah were the guest of honor.  Weather was good. There were lots of drinks, chips and a little bit of healthy food just in case scurvy attacked future’s best hopes. From grade 12 diplomats to diploma recipients was reason to party. One of the many great get-togethers of the past year.

Over the last winter Kiersten went through a number of vehicles.  She started winter driving the Volvo 850, but it decided one day not to start.  The replacement was Gracia’s old Acura Integra that was stolen-then-recovered.  Within weeks the engine blew due to excessive abuse by past thieves.  Car number 3 is a black Honda Civic and just happens to be the exact same make/model/year as Gracia’s car.  Whenever I give a nice part to one daughter the other daughter becomes jealous. When they’re home together I fear that pilfering of parts will occur in the middle of the night with either daughter tearing parts off their sister’s car. Working light bulbs, wiper blades. Mud flaps.  It’s open season

Gracia’s been enjoying a good starter career helping young adults navigate various government systems to achieve education and become good parents simultaneously.  She’s liking the job immensely although she’s finding compensation is never equal the effort. Isn’t that true for all of us?  Gracia’s current apartment is quite adult-like.  In some respect she likes the “grown up” atmosphere but worries when friends and high-octane fun fills the apartment. Dinner and a comedy movie shouldn’t be outlawed.  Management posts rules and helpful advice such as designated laundry room use schedule. Guess who gets the Friday evening time slot? No roommates to deal with anymore and that’s the best part for Gracia.

Gracia came out to the cottage for the first time in many years, airplane mode with Laurie. All of us headed off to tour Ottawa for a weekend. Gracia arranged accommodations on AirBNB which worked out great.  Byward Market, the Museum of Art and War Museum were on the must-do list.  We couldn’t get into the Parliament building tour due to a four-hour lineup for tickets. Thankyou Canada’s 150.  Weather was wonderful, and the outside tour was open, free and uncrowded.

Kiersten drove out east with myself and her uncle James.  Kiersten was eager to participate in the driving and do a straight-through drive meaning no hotels or stopping.  The land speed record is 36 hours (within the family).  We managed to do it in 38 hours. Start time was 12:30am.  While driving the US portion of the route, we saw a car with a bumper sticker supporting Trump.  We attempted to get a photo, but the car’s evasive maneuvers prevented a clean shot. 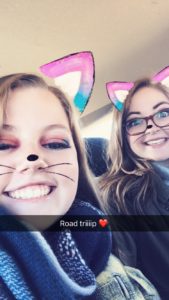 Kirsten also worked at camp Northway, just down the lake from the cottage, for one month over the summer. She worked in the kitchen preparing food for all the campers. It was a great experience and she had quite a bit of fun but made little money.  Being on the same lake, Laurie, Gracia and myself saw quite a bit of Kiersten over the summer.  Now that we’ve all returned to Alberta, Kiersten is into her first year of a Bachelor of Science in Ecology which starts at Red Deer College and finishes at U of A. I am still doing the odd website and carpentry, Laurie is working at Pembina Pipelines.

Have a merry Christmas and a happy new year!

A few extra scrapbook style photos from the past few years.